Recently, Nuage Networks has extended its Software-Defined Networking (SDN) platform to include Hyper-V support. As such, VXLAN overlay networks can be stretched across KVM, VMware, Hyper-V hypervisors and hardware VTEPs – all provisioned out of the same network policy system.

In this post, we are going to look how the Nuage Networks SDN for Hyper-V integration looks like, and we will demonstrate how to network across a heterogeneous environment of Hyper-V, KVM, VMware and Bare Metal end-points.

Before going into the specifics of the integration, let us first start with a simplified view of the Nuage Networks Virtualized Cloud Services (VCS): 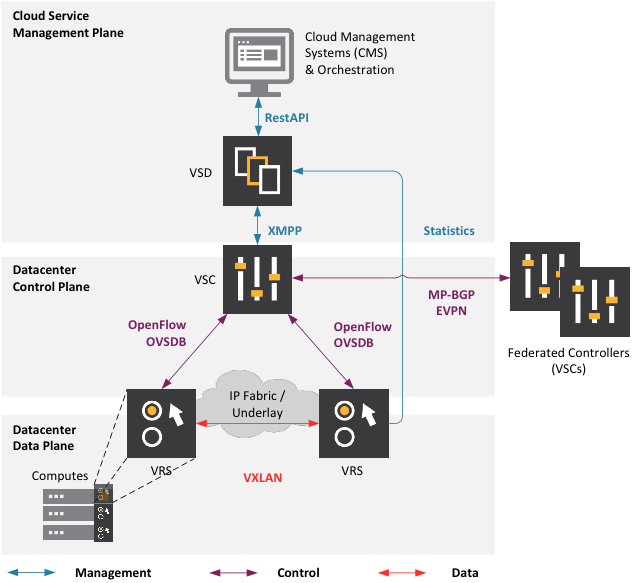 This architecture is very typical for a Software Defined Networking platform and is divided into 3 main components:

OVS for Hyper-V uses the extensible Hyper-V Virtual Switch which allows you to extend the platform with features like forwarding, filtering and monitoring on the virtual machines network processing. The Open vSwitch extension is implemented as a filter driver for the Hyper-V virtual switch and naturally runs in Kernel-mode in the parent partition.

As such an extension, you can review it in the Virtual Switch Extensions of Windows UI or in PowerShell:

The user space portion of the OVS solution was ported from the Linux OVS implementation and comes with a very similar set of tools and daemons.

The ovsdb-server and ovs-vswitchd run as a set of Windows services, while a set of ovs-i*ctl tools is available to configure, query and interact with those services or with the OVS kernel data path directly.

In the case of a Nuage Networks installation:

These extensions are similar to what was done for a Nuage Networks in Linux environment.

To expose the resources of a hypervisor within an OpenStack environment, following services need to run:

To include a particular hypervisor into Nova’s scheduling and placement logic, it is required to run a local Nova Agent process. This can signal to the OpenStack controller how many resources are still available, and it takes care of the actual spawning of the virtual machines.

Cloudbase Solutions has packaged the installation of the OpenStack Agents in an easy-to-install MSI package. Cloudbase Solutions is the leading contributor of everything Windows related in OpenStack and it has worked very actively over the last years to develop the required Nova, Neutron, Ceilometer and Open vSwitch (OVS) components in order to add a Hyper-V host as a hypervisor in an OpenStack environment.

For this particular integration, we need to install the Nova part, and optionally the iSCSI Initiator Service. 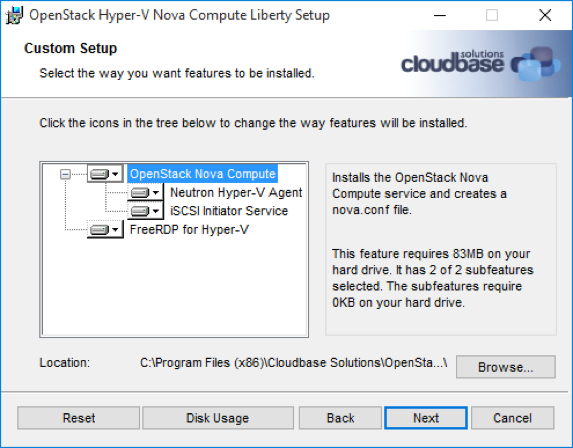 As part of Nuage Networks VCS architecture, there is no need to run a local neutron process/service. Any networking attachment to the OVS Bridge is done directly by the OpenStack Nova Agent, while the OVS ruleset is programmed through VSC.

This implies there is no integration with OpenStack’s RabbitMQ bus for networking. There is also no use of separate bridges or namespaces for standard OpenStack’s Distributed Virtual Routing (DVR) or Floating-IP. All such info is directly programmed into the logic of a single OVS Bridge.

As an example, we will show the deployment of a particular VM in a mixed hypervisor environment.

In this example, we selected a mixture between KVM, VMware and Hyper-V, and we also added a native VLAN port.

Each Hypervisor type is managed as a separate Aggregation Group and associated Availability Zone so that placement can easily be controlled.

The Hypervisor view on Horizon shows the hypervisors like this:

Two logical subnets are deployed in OpenStack to boot VMs against, with a variety of virtual instances in each subnet.

Similar to any deployment of a VM, Horizon or nova boot can be used:

In OpenStack we can see that it got scheduled on the Hyper-V node, and also in Hyper-V Manager, we can find an additional VM showing up.

We can check a few items to verify proper network attachment and connectivity to the other hypervisor types.

A full view on all the end points in a particular subnet can be found in the VSD Architect, the Nuage UI component. It will always show you the full network topology (including physical servers), and you can browse associated policies. 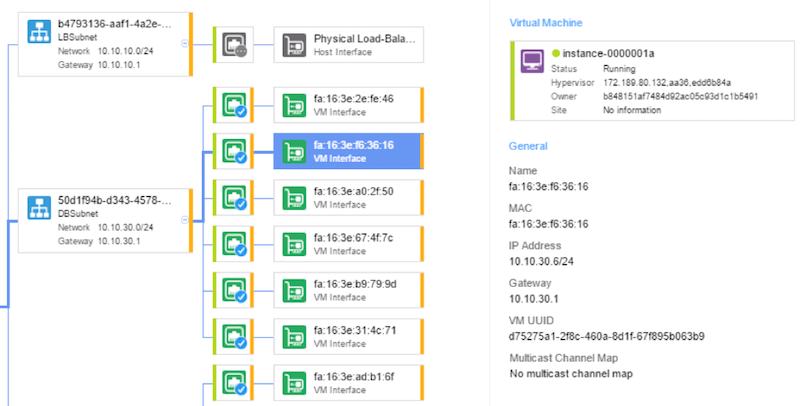 We can verify that the VM has been added in the appropriate subnet. It immediately gives the user the confirmation that all policies are also downloaded and enforced.

Inside VM you can verify that it has received an IP

Note that this IP got provided through DHCP running as part of the Nuage VRS userspace on Hyper-V. You can also verify reachability to other hosts within or across subnets. As an example, this is a PING to another Hyper-V VM (this is a nested hypervisor environment, explaining higher latency):

As previously explained, the actual network connectivity of the VM is established through OVS. The Nova Agent will tie the virtual machine to the OVS Bridge, after which any traffic will be processed by the OVS ruleset that got programmed.

Through the OVS toolset we can examine proper configuration and enforcement. Nuage Networks has slightly extended the ovs-appctl command to facilitate some of this:

The port-UUID can then be found back in the ovs-vsctl command output: 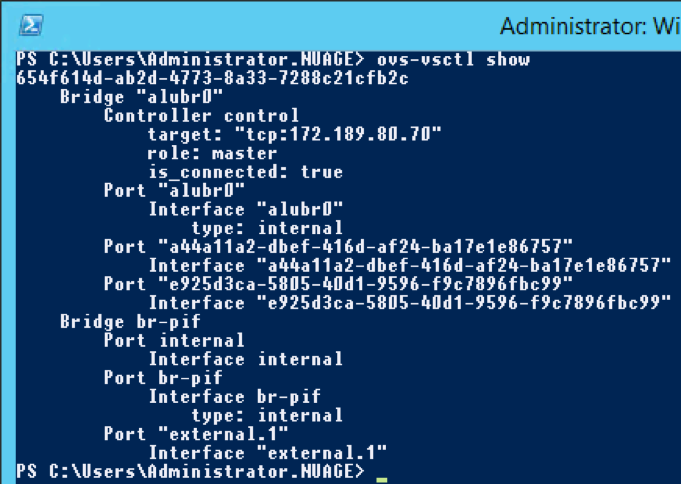 The alubr0 bridge mentioned in the above screenshot is created by OVS as part of the Nuage Networks VRS functionality. As such, it has been proven VMs were launched out of OpenStack on top of Hyper-V, with the network being established through OVS.

At Nuage Networks we aim to deploy logical networks across any type of hypervisor, enabling connectivity and security. The OVS work for Hyper-V by Cloudbase Solutions has tremendously helped the community and companies to enable new possibilities for their infrastructure.

Nuage Networks, together with Cloudbase Solutions, is enabling Hyper-V as a first-class citizen in OpenStack so that organizations can leverage OpenStack as a single orchestration platform while choosing the best hypervisor for their various workloads. By using Nuage Networks VCS, customers also get a very versatile and flexible networking layer so that they can software-define the creation of security policies and the extension into the public cloud or branch office networks.